N&V - Leaving a strong Chamber behind 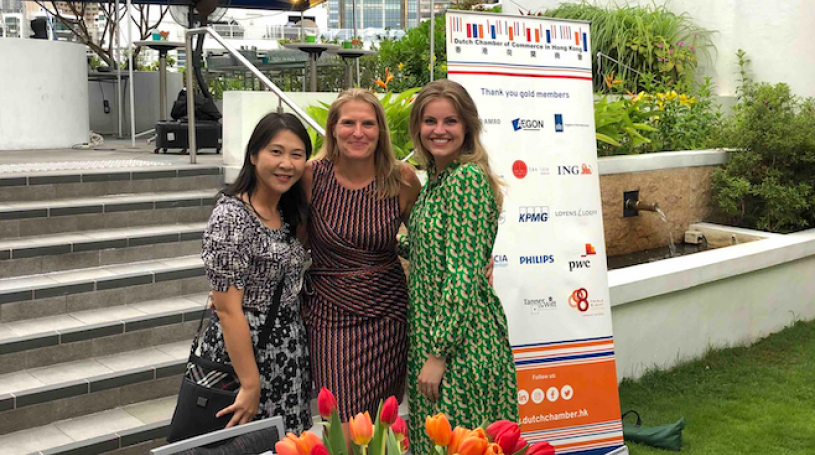 After four and a half years of hard work and dedication to the Dutch Chamber in Hong Kong, our General Manager Muriel Moorrees is relocating to the Netherlands and will unfortunately leave the Chamber. She is leaving a very strong Chamber behind and played a crucial role in achieving that. We sat down and talked about her time at the Chamber.

What are your most memorable moments as GM of the Dutch Chamber?
Not too long after I joined the idea to start a mentorship programme was brought up by the Young Professionals Committee, led by Judith Huismans (Marketing and Commu- nication Manager at the time). I thought it was a great idea, so we set it up right away. It’s been successful ever since – we’re organising the fifth edition this year. in September.
Another great moment was organising the Business Awards Gala in 2019 together with the team and the Gala committee. The theme of the night was ‘Game Changers’, focusing on sus- tainability. Not only was it a beautiful gala and awards night with 160 guests, but the whole production was a grand expe- rience that took four busy months.

What kind of changes have you seen in the Dutch-Hong Kong business scene?
One of the changes that had already started and has continued further is that Dutch multinational companies employ fewer Dutch people overseas. We’ve seen this trend in Hong Kong as well. About eight years ago, there were around 6,000 Dutch people in HK, now it’s estimated at 3,000 only.

Few people, especially families, are coming in on an expat contract and they are leaving the city as well – partly also because of the protests and the pandemic. However, on the other side, more Young Professionals are entering Hong Kong. This group either has their own start-up or SME or come to work in Hong Kong on a local contract. In the Dutch Chamber’s membership base, we have seen a clear increase in start-ups and SMEs.

What were some of your main goals and projects within the Chamber?
One of the main goals was to professionalise the operational side of the Chamber, for example our CRM system, the website and other systems. We implemented those rapidly in the first year.

A few years ago, there was a decreasing trend in member- ships, mainly because of fewer Dutch people living in Hong Kong and Dutch multinationals reducing their footprint in Hong Kong. I set two goals for myself. One was to reverse the decrease in members and to grow our membership base, which is, of course, a continuous goal. A way to do this is to make sure to be involved with our members and know what they desire, so we can provide good added value. The second goal was to make the Chamber more visible, partly with the new website as well as our social media channels and digital marketing. We can still grow in that but we are definitely on the right track.

It was important to me to set specific annual goals as well. During one of the years, we held a campaign to ban sin- gle-use plastic, which is a challenge, but I hope we have raised awareness among our members and the employees of our member companies.

For the past two years, I have been working extensively with the Board of Directors to set strategic goals to further prepare and strengthen the Dutch Chamber for a challeng- ing future. Originally, the function of the Chamber was to be a source of information for companies but that is now to a large degree readily available on the internet. So we need to re-invent ourselves. An example of our recent initiatives is to provide a soft landing toolkit for companies that want to set up a business in Hong Kong and we have further made the first steps towards our Academy. Through our Academy we currently offer Cantonese and Mandarin language courses for our members. The Academy has a lot of potential to offer many different types of professional development courses for which we look to cooperate with our partners.

Furthermore, we are looking for more cooperation within the Greater Bay Area (GBA) and with the Netherlands to increase our visibility and encourage companies to come to Hong Kong. The latter has been challenging but the Chamber plays an important role in the re-launch of Hong Kong’s image and emphasising the positive points of doing business in Hong Kong.

In the Netherlands, we are cooperating with NLinBusiness and sector associations, not only for promotional activities but it also provides an added value to our members as well to expand their network and business opportunities. Similarly for the GBA where we cooperate with the Benelux Chamber (BenCham) and the Dutch Consulates in Hong Kong and in Guangzhou. Together we organised a first webinar series about doing business in the GBA last year.

What will you miss about Hong Kong? And what are you looking forward to in the Netherlands?
I will miss the international community and lifestyle, which was one of the main reasons to move abroad in the first place. In Hong Kong, the people and the city have great energy. It is a small place, but we have got everything: the beaches, water sports, mountains for hiking, the 24/7 city life, islands and it’s all so close by! We live near the beach now; every weekend feels like a mini holiday.